Hopelessly traversing the docks of Bluff scanning for people, a billboard, an idling boat . . . any sign of Shark Dive New Zealand, I crunch irritably on the last few pieces of Inca corn. It’s 6:50 Sunday morning. The quay is empty and we’ve paid in full. A lone man in his early thirties stands by the bus stop anxiously twisting a strap around his finger. He’s also on this supposed shark dive. Paul offers him a seat in our warm car, but he declines. Through the open window the two compare notes on the correspondence they’ve received since booking. Perturbed by the frosty air now filling the car I whip the heat on high and reach into the backseat and dig for a snack bar. I’ve been up since 3:30am and am in no mood for small talk. There will be no Hilton breakfast this morning.

Buoyant clomps upon the asphalt brings the conversation to an abrupt end as we all scan the otherwise noiseless quay for the source of this disturbance. Corkscrew curls skirt the bottom of her wooly cap and freckles splash her alabaster skin. Dressed in a pair of red waders and oversized boots, Nic looks more like someone’s kid sister playing dress-up in her big brother’s snow gear than a shark dive aficionado.   Pleased to have located the last of her “crew” she motions for us to follow. END_OF_DOCUMENT_TOKEN_TO_BE_REPLACED

our drive from Dunedin to Queenstown, delirious from sleep deprivation, I try to take it all in.  As we cruise the crease of the mountain highlands the earth folds around us in warm hues of emerald and gold rising up to clasp heaven’s hand.  Fluffy white puffs scatter up the jagged hillside in a brilliant dusting of white confetti like angelic clouds of sweetness trying to find their way into the sky.  Yes, before we leave New Zealand I must pet one of these adorable little lambs. 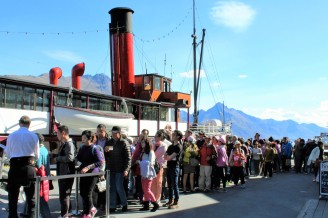 As luck would have it the opportunity presents itself on day four of our trip.  During one of our walks along the Queenstown shore I spot a large poster of a young girl embracing a sheep; her gentle fingers intertwined in the wooly locks of this divine creature as he affectionately rests his chin upon her knee.  One hour and a hundred and fifty dollars later Paul and I are gliding across Lake Wakatipu aboard the TSS Earnslaw in route to Walter Creek High Country Farm.

The line to board the old steamship is long and finding two seats together proves challenging.  Well-oiled benches though charming fail to provide orderly seating as the amount of space required by each patron appears to be based less on size and more on personal preference.  Bags, jackets and outstretched legs fill many of the choice seats.  Unfamiliar with the social mores of bench seating aboard 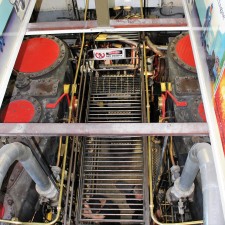 a steamship we wade through the stagnant crowd looking for a suitable spot to claim.  An abrupt damp heat greets us mid ship and we stop to peer through the iron ribs of the old boiler room and into the heart of the vessel.  A whiff of the warm ashy air hits us as stokers shovel coal into the fire to the tune of one ton an hour.  At the stern of the ship, just behind the pianist we find an open bench.  As we bid adieu to Queenstown the silver haired pianist plays tunes reminiscent of the Titanic.  Ironically both ships were completed in the same year.

A warning from our captain directed at distracted parents, reminds people to stay off the rails.  The frigid waters of lake Wakatipu would most likely cause hypothermic death within thirty minutes of exposure; plenty of time for Paul to swim ashore and for me to cling hopelessly to an iceberg.   The sixty-minute ride to Walter Creek High Country Farm is novel for about ten minutes, after that we retreat to our seats. Paul orders a beer and I snag a cocktail napkin to begin my first blog post of the trip. 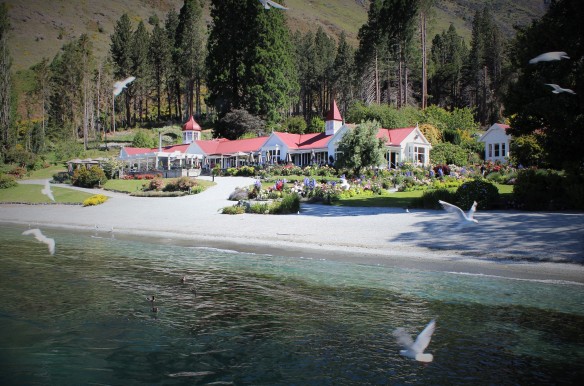 With a hundred and 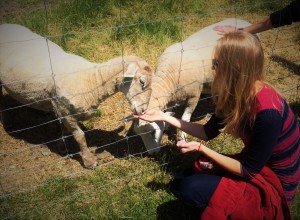 sixty-three people in tow and four activities planned, dividing us into groups seems most logical, but not the case.  Shepherds, used to corralling herds, apply the same method to tourists.  We disembark and after a quick introduction all head to feed the animals.  With outstretched hands we wait patiently for a few pellets of food.  I try to contain my enthusiasm and let the little ones go first.  Disseminating information to a group this size, half of which don’t speak English proves challenging. 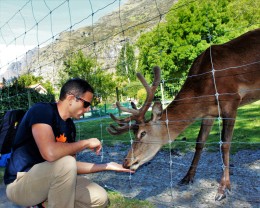 While Tom directs everyone to afternoon tea, Paul suggested we hang back.  He returns to the food bin and grabs another handful.  I follow.  It takes a bit of convincing but eventually he woos a handsome stag to the fence.  After making friends with a few bits of food the wide eyed deer lets us rub his antlers; velvety soft.  This entices others to join and before we know it doe, lambs and sheep abound.  This is the experience I was longing for. 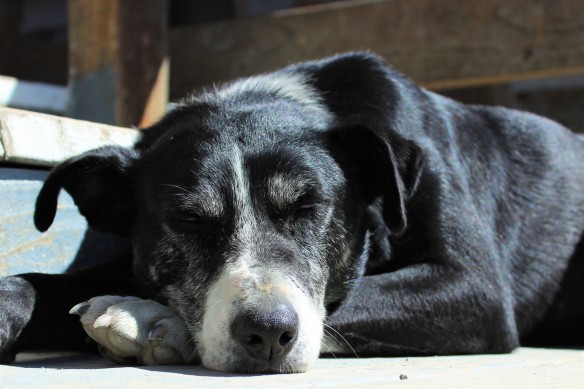 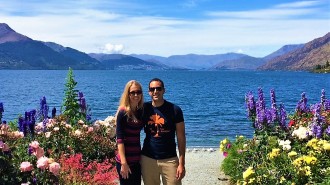 As we finish our tea and start towards the barn Tom calls for Belle to follow.  The well weathered gal lays between the second and third stair of the sprawling country estate.  Her tired face rests upon an outstretched paw, eyes winced shut in the bright afternoon sun, forcing a contorted grin and exposing a chin full of white wiry hair.  She ignores his call in a show of defiance or more likely deafness.  He calls for her again, this time in a louder more insistent tone and she rouses only to stretch and yawn before sauntering slowly in his direction.  The old girl is but a vexatious thorn in an otherwise magnificent display of voluminous pink roses, sweet smelling lavender and trumpeted fox gloves manicured to cinematic perfection on the windswept shore. 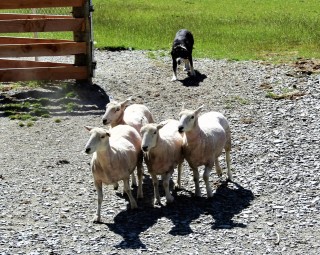 gate and we fan out along the fence in anticipation.  He removes the metal collar from around Belle’s neck and she morphs into a magnificent beast.   A genetic refinement of speed and agility, half border collie, half Australian cattle dog, she effortlessly bounds high into the hillside to retrieve the four little meringues.  In a beatnik cadence of barks and baas she rounds them to her master with skillful precision.  Her chest heaves and falls under heavy breath but her eyes never leave the target as she tilts her ears towards her master and waits for instruction.  With each guiding word to “step” she drops a paw.  Nails pierce the dirt and she slogs her belly across the earth flattening the roughage like a rattlesnake hunting prey in the bush.  Impressive! 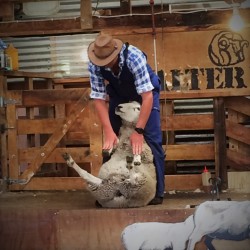 Catching a sheep for the shearing demonstration proves challenging even for a seasoned professional.  Overcome with stage fright and crouched in a seated position, front hooves pressed firmly together she slides onto stage under pressure from her handler.  This being her second sheer this year I’m pretty sure the little sheep knew what to expect and needless to say was not looking forward to her impending trim.  A struggle ensues, a haphazard dance of sorts as Tom wrestles the fuzzy cloud onto her back.  Stillness.  Defeat.  Hooves in the air she relaxes in to a sedentary trance.  For some reason being upside down is calming to sheep.  With one hunky farmhand curl Tom pulls her into a seated position flexing his biceps for the audience; her fluffy bum atop his shoes, her shoulder blades pressed firmly against his thighs and her hooves spread eagle for all to see.   Yep, she’s definitely a girl. 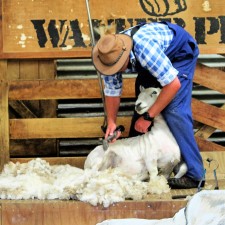 the audience and he smiles triumphantly.  I focus my camera; it’s time to begin.  From my vantage point at the back of the barn the sheer is smooth and dramatic; like clearing fresh snow from a car windshield; one long swipe after another, but as I zoom in for an up close shot, I get a vastly different perspective.  Like a hungry adolescent devouring an ear of silver queen; the clippers travel her body row by row in a series of uneven bites revealing a nappy gnarled cob.  Embarrassed and defeated she scrambles in place still bound by her captor.  Her hooves scarring the platform with deep gashes as her heels dig in under the pressure from her voluptuous legs.  Nearly nude and on shameful display as though she were a piece of meat she cowers back to the pen.  I feel my cheeks blush empathetically.