Satisfied with the tautness of 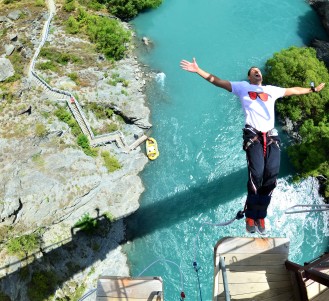 the ankle strap he reaches for the first of two carabiners and clips it into the nylon loop positioned perfectly between the legs, just slightly above the bridge of the feet.  Snap! His hands continue up the nylon strap right over left inching uncomfortably close to the crotch.  The right hand releases springing up to the belly then hooking down toward the navel.  His thumb extends forward breaking open the second clip.  The carabineer collides with the metal D-ring and closes back upon itself.  Snap! Snap! One final tug on the harness confirms a snug fit around the waist.  Two painful hops toward the ledge; feet heavy with hesitation, legs jelly with nerves.  One final look down . . . way down.  His outstretched hand points towards a platform on the adjacent mountain side.  One final picture.  One final breath.  Peripheral vision wains to the drum of a single heartbeat.  One… Two… Three… Bungy!  Not A Chance.  Fortunately, my moment of clarity came well before this point.  My twenty-minute trip from Queenstown to Kawarau Gorge Suspension Bridge was simply to document Paul’s Bungy jumping experience.  And that’s exactly what I did. 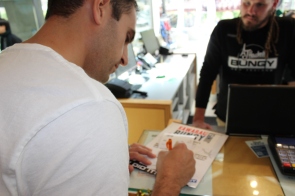 Bungy is a brilliant example of social media marketing at its best, drawing thrill seekers from around the world thirsting for a sip of excitement and the sharable content to commemorate the moment.  Appealing to emotions of those looking for a visceral high and the desire to join an “elite” club of the truly nuts.  Bungy jumping is a rush of excitement for mind, body and wallet to the tune of about $10 a second.  Through the top of the giant bee hive we go down the long spiral ramp which hugs the inner wall of the dome.  Massive flat screen TVs line the walls depicting raw expressions of adrenaline madness amplified with pulsating techno music.  Equally as cool as the facility are the crew employed.  At the bottom of the bee hive we are led to a desk by a rugged Kiwi sporting a partially groomed beard and a lip ring.  His dreadlocks, pulled loosely back, expose the sides closely sheered three or so inches above his ears.  Few occupations lend themselves well to this hair style, 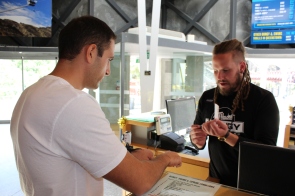 fortunately for him Bungy jumping instructor is one of them.  After signing his life away Paul is weighed and marked with two numbers, his weight on his left hand and his photo number on his right.  A quick swipe of the Visa and we were ready to go.  Jump or no jump the Bungy experience is non-refundable from this point forward.

At this point we spilt.  Paul goes to the bridge to get fitted for his harness.  I head to the photo deck to join the other spectators, most of which are Korean.  As I write this Korea is experiencing an economic boom.  The New Zealand Tourism Consulate has wisely responded with a full on advertising campaign designed to make Korean travel fluid.  Korean translated maps and brochures dot every visitor center and almost all guides we meet can say hello, goodbye and thank you in Korean; many know much more.  At least for the time Korean in Queenstown is as common as Spanish in Florida.

five days we’ve been here I’ve come to love Korean tourists.  In fact, should there be a list on the best tourist worldwide I do believe Koreans would rank at the top.  With amenable dispositions and adventurous spirits they are great at lines (forming them and standing in them for long periods), as well as some of the first to volunteer for the chance to try something new.  Want to dance under the frigid waters of the Milford Sound Falls?  Sure why not!  Cheesy lanyards and logoed hats provided by tour companies, others toss in the trash, they wear happily.  Yes, their eager nature makes them quick to crowd to the front but they are so jovial and polite it’s hard to find fault.  Besides, the tallest among them is still a good six inches shorter than me so by all means crowd ahead. Surrounded by Korea tourists I watch the barrage of jumpers hurl themselves from the bridge one right after another.  The entire process takes about 5 minutes and each reaction is the same providing me with ample m 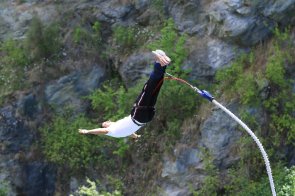 aterial to assess the typical Bungy jumping experience without actually having to take the plunge.  In describing the sheer and uncontrollable panic experienced by the jumper in the 20 seconds leading up to the fall, I draw on my one and only skydive experience (never again!).  Hey, every great story includes a bit of creative licensing. 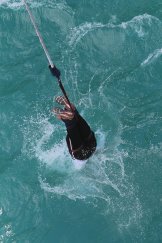 With each jump my comrades cheer with delight, their $3,000 cameras fixated on the platform ready to capture every shot.  I’m pretty sure they have one or two friends at the top but they take pictures of every single jumper with unrelenting focus and enthusiasm.  Finally, Paul enters the shoot and the hook up process beings.  I step closer to the rail.  Eyeball to the lens I zoom in for a close-up view of the process and snap a few quick photos.  After passing inspection Paul grabs the metal bar, pulls himself to his feet and rotates 180 degrees.  Still holding on to the bar he takes two backwards hops to the edge of the platform, looks down, and stops.  What is he doing?  Every Korean camera goes up, cell phones and iPads too.  The chatter intensifies.  After a satisfying nod at the angry waters below he looks out toward the observation desk and scans for me.  I wave.  Yes, I’m paying attention.  Don’t want to miss this and have to pay for a second jump. 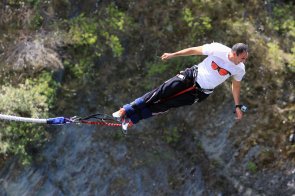 I can feel the Korean on my left looking at me for a response.  I shake my head.  Yep, it looks like he is going to jump backwards, that’s not surprising.  He reciprocates with something in Korean.  I nod and he jumps with delight.  Having broken the language barrier, I motion for him to move so I can steady my arm on the rail.  He complies.

Two more hops on the platform.  Heels suspended in midair Paul rises on the balls of his feet.  A GoPro mounted securely to his wrist to capture the full decent.  Back arched, arm splayed, he rolls his head back and he gazes into the heavens above.  One small jump and he falls into the sky.  The ride is intense but fast, so fast he is in and out of the water before I have a chance to process it.  Good thing, I had no idea this was part of the plan.  What looks like a hard splash from my vantage point he assures me was just a light dip in the water.  As he nears the river the enormous rubber band takes hold slowing his decent.  The band recoils and releases several more times before the ride finally comes to an end.  Paul is left hanging upside down about 10 feet above the water waiting for two men in a life boat to break him free.  As he lay flat in the boat I lean over the side 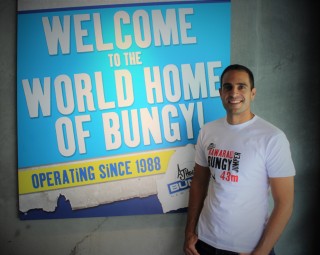 of the platform and we make eye contact once again.  I wave and he gives me two thumbs up.  He joins me a few minutes later outside the beehive quite pleased with his accomplishment and soaking wet from the waist up.  I’m glad it’s over.  He’s happy they threw in a “free” dry t-shirt.  Welcome to New Zealand indeed.  It’s sure to be an exciting three weeks.

2 thoughts on “Queenstown NZ Part I”