The bus ride to Bangkok was surprisingly short for two reasons. First, it was New Years Eve so much of the city was on Holiday at the nearby beaches

freeing up the roads from the usual congestion. Second, our bus driver actually drove the speed limit. Expecting a ride somewhere between3 ½ to 4 hours we were delighted to only be in the bus about an 1 hour and 45 minutes.

Our first impression of Bangkok; we blend a lot better here. Unlike the homogeneous populations of Hong Kong and Vietnam, Bangkok is an eclectic mix of people; there are lots of Thais and Asians but also a fair amount of Europeans and Australians. Our second thought, “wow, this city is dirty!” Smog we were use to, but loose trash and a general rotten smell through out the city was distinct to Bangkok.

Using Hotel points on New Year’s Eve proved to be a bit challenging but we ended up very happy with our selection. I narrowed our choices to 2 and asked Paul to make the final decision. He ended up selecting the Hilton Sukhumvit Bangkok based solely on the fact that this one had a rooftop pool. Aside from the pool, the property had a fabulous concierge lounge and was located just a few short blocks from the MRT. Lily, one of the concierge lounge attendants, proved to be a valuable 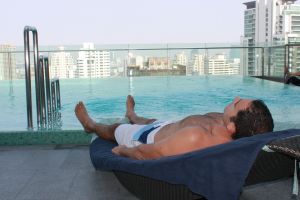 asset and we relied on her a great deal over the next 24 hours. She helped us get the most out of our Bangkok experience. Her first suggestion – taking a cab would certainly be the easiest option, but taking the subway to the Chao Phraya River and hopping on a river taxi would definitely be more “fun.” So since we were looking for “fun” that’s exactly what we did.

Treacherous transportation seems to be a reoccurring theme throughout this trip. First there was the crazy ride from the Hong Kong airport

on that double-decker bus which flew madly around corners causing luggage to come crashing down all around us. This was followed by a wild motorbike ride though the streets of Ho Chi Minh City on the Back of the Bike Tour. So it seemed only natural that our transportation in Bangkok would be equally fanatical. After an uneventful ride on the subway we took a short walk down to the river. From the road we could see a partially shaded cement pad with a small ticket booth which was surrounded by about 120 people. I said “This is going to take all day!” The crowd was so disorganized we didn’t even know where the ticket line began. 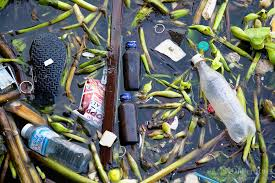 Reluctantly we approached the group and to our surprise we were immediately greeted by an official looking woman who escorted us right to the front of the ticket booth. As we followed the woman, Paul pulled out his wallet and rifled through the various currencies in search of Baht. A warm stench filled my nostrils and I was compelled to ball up my sweater and cover my nose. Upon closer inspection I could see bits of yard clippings, chunks of food and pieces of partially submerged garbage all along the edge of the milky brown river. That rotten smell we noticed earlier; I think I had just found the source.

A few minutes later the boat arrived and we were instructed to get on. Even though we were practically the last people to arrive we were some of the first to board. No one seemed to be in a hurry;

they just smiled and nodded for us to go ahead. We took a seat with about 50 other people and prepared to ride, however we were far from leaving. More people began to trickle aboard; first loosely filling the aisles then swelling to pack every inch of the vessel. I couldn’t believe it. The small woman in the golf shirt had loaded our boat tighter than a Hong Kong subway car during rush hour and actually gotten every single person aboard. Similar boats cruised by in the other direction and we bounced along in their wake. Cringing with each spray from the Chao Phraya River I realized why we were

encouraged to board first.

Not sure “fun” will make the list of words I will use to describe this experience. I will have to wait until I am certain we have made it through the window of time when inadvertent contact with river water may cause serious illness. For now I would prefer to just call it adventurous.

While I was focused on avoiding contact with the water, Paul was busy studying the map and observing the ticket collection process.

We arrived at the stop for the Grand Palace and disembarked. On the way to the entrance we compared notes. According to Paul the payment process appeared to be very disjointed. Passengers were not required to present their tickets prior to boarding and in fact about 50% of our travel companions had not even purchased them.

Payment actually occurred in transit. As the boat puttered down the river one representative weaved through the crowd collecting tickets from people who had purchased them and cash from those who had not. A full boat and a short ride meant that passengers not holding a ticket may get to ride for free. On subsequent boat rides we would wait until the last minute to board and even ride once for free.

That afternoon we spent several hours visiting the three most well known historical sites in Bangkok – The Grand Palace, Wat Pho and Wat Arun. Collectively these magnificent temples are the most stunning manmade structures either of us has

ever seen. We were truly in awe not only by the size of these incredible creations but also in the level of detail they contain. Should we return to Bangkok we will certainly tour these sites again. One trip was definitely not enough to take it all in.

Entering the gates of the Grand Palace was both an interesting and overwhelming experience. Even though the grounds encompass over 2 million sqft, to us they felt extremely claustrophobic as there were swarms of people absolutely everywhere. In fact, the crowd was so dense that that in most areas of the palace it would have been impossible for me to extend my arms to either side

and turn in a complete circle without touching someone. Following the mass of visitors we slowly made our way to the gate. Positioned at either side of the entrance were two women, holding laminated signs depicting clothing which was not allowed in the palace. Prospective visitors with

exposed ankles and shoulders were refused access and rerouted to a separate line to rent appropriate clothing. After being belted in loose fitting tops and elephant print parachute pants they were then routed back to the line for a second wardrobe inspection. Fortunately we passed inspection and we were allowed to roam the grounds parachute pant free.

As we wandered the palace,

mouths gaping in amazement, it became evident why the crowds were so thick. It was New Years Eve and thousands of Thais had come to pay homage to Buddha in hopes of good fortune for the coming year. In the Central Square a thick smoke filled the air as people hurried by clutching sticks of smoldering incense and fresh flower offerings. Nearby many more worshipers gilded small Buddha statues with bits of gold foil.

We made our way down the stairs 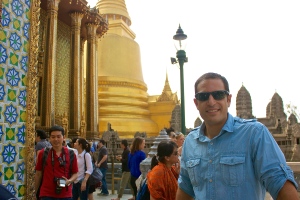 and into a less congested area on the side of one of the buildings. Paul unfolded the large map and examined it up against the beautiful gold and ruby tiles of the temple while I hunted in our bag for some water. I wish we had hired a guide; we both did. One of the lecturers on the cruise ship had told us that guides were provided inside the gate however this was clearly not the case. We contemplated going back out to get one, but were told if we did so, we would have to wait in that ridiculous line

again and pay a second $30 entrance fee so we just decided to continue on with our self guided tour.

The Grand Palace was commissioned by King Rama I in 1782 and continues to be the official residence of the king today. The most notable treasure is the Emerald Buddha which is actually carved from a single piece of jade and stands a mere 24 inches tall. What we found to be most impressive was the intricate tile work that covered most to the facade. The palace is in really good condition thanks to a restoration team who has been replacing tiny tiles and maintaining carvings continually for the past 200 years. I am certainly glad we braved the crowds to see this.