Vietnam is an interesting place with lots of rules. No overnight trips allowed without a Visa and no currency exchange outside the country however you can purchase anything from a diet coke to a ride down to the marina for exactly one US dollar. 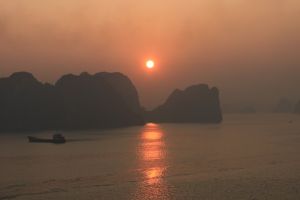 Our first view of Ha Long Bay came at sunrise as the ship sailed into the bay. The water was extremely calm but it was particularly cloudy so we were eager to get off the ship and take a closer look. After a quick tender to shore we made our way up the pier and were greeted by about 50 mope head drivers eager to take us for a ride. Paul was more than willing to hop on but I was less than enthusiastic. The lack of helmets and erratic flow of bikes was not something I was ready to tackle,

besides after 24 hours at sea floating around in the pool and enjoying more than our fair share of cruise food we certainly needed the exercise.

Vietnamese people are soft spoken and very polite but also extremely persistent. Even though Paul respectfully declined their repeated offers to take us to the marina, two motor bikes continued to pursue us for at least a half a mile. It was cute but a bit irritating.

Ultimately Paul won out and we arrived at the marina about 30 minutes later on foot as planned. After negotiating a $25 dollar per person rate (opposed to a $75 rate on the ship) we boarded a boat with about 20 other people and set sail. 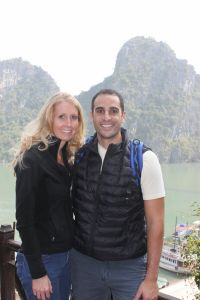 Ha long Bay is made up of large limestone formations or Karst resulting from glacier changes over millions of years. Melting glaciers caused the water to raise allowing coral to grow while freezing glaciers cause the water to recede and coral to calcify. The Karsts were further shaped by pockets of water and a rolling tide creating caves. During the Vietnam War, several of the larger caves were actually used as hospitals. By following a series of winding paths we were able to climb to the top for a breathtaking view of the bay.

After exiting the cave we rejoined our boat for a short ride to the floating village (my favorite part of the trip).

Far from shore and hidden among the karst was a floating dock which was set atop large blue barrels and Styrofoam blocks wrapped in tarps which kept the structure afloat. After obtaining bright orange lifejackets from the guides we stepped into a small wooden boat for a closer look at the karst and a tour of the floating city.

It was simply amazing! The entire town built atop floating barrels and Styrofoam linked together with wooden planks and a series of ropes. It was fascinating to watch the people going about their daily lives napping in hammocks, washing laundry, pealing fruit, even cooking with fire on the back porch as curious tourist rowed by with cameras in hand. The floating village even had a floating school.

Our tour continued with a row under a low lying section of limestone though a small opening and into the center of one of the large hollowed out karst which made us feel like we were sailing around the bottom of a volcano.